Teaching Games for Understanding (TGfU) emerged from the collaboration of Rod Thorpe, David Bunker and Len Almond at Loughborough University. Since the description of the school trials and the  articulation of the model in the Bulletin of Physical Education in 1982, with further detail released in 1983 and 1986, TGfU has been advocated with enthusiasm in physical education literature as an enhanced approach to games teaching. The approach “flipped” PE teaching from a common linear technical-before-tactical games experience, described by David Kirk as sport-as-techniques and Richard Tinning as Demonstrate-Explain-Practice, to a tactical-before-technical experience initiated by the understanding of the game, initially as appreciation of what possibilities (some coaching scientists now say affordances) are available to players given the rules of play (some coaching scientists now say constraints). The 6 steps of the TGfU mode are illustrated in the diagram below.
1. Game


If you are 'doing' TGFU, you are following the 6 steps of the model.
In the mid-1990s, Stephen Mitchell and colleagues took the idea of TGfU to the USA and simplified the 6 steps to three steps, and it became the Tactical Games approach.
1. Game Form
2. Tactical Awareness         3. Skill Execution
In practice, this model often looks like: Game-Practice-Game
Also in the mid-1990's, the Game Sense approach was trialled and then described in Australia. The term ‘Game Sense’ had been used before. For example, Thorpe and West in 1969 used it as a description of game intelligence and as a games teaching performance measure. It was also used by Rick Charlesworth in 1993 to describe the product of player development as he described coaching using designer games. Alan Launder also used the term game sense to describe the product of player development in the late 1990's in his Play Practice book. It might then be argued that the term 'game sense' was an existing description of the objective or outcome of sport teaching/coaching, albeit perhaps, not well used or well known, prior to the Game Sense approach development in Australia. In the mid 1990’s, Rod Thorpe visited Australia to work with the Australian Sports Commission (ASC) to develop a new approach for Australian sport that focussed on developing “thinking players” using a games-based approach. This thinking of the players was prompted by the coach asking questions in preference to, but not exclusively by, asking questions.


1.  Sampling: The use of modified games and sport as a way to experience 'full' versions of games;


2.  Exaggeration: Changing game structures, such as rules, equipment and play space, to promote, exaggerate, control or eliminate certain game behaviours to enable teaching through the game;


3. Representation: Modified games structured to suit the age and/or experience of the players; and


4.   Questioning: Prompting player thinking and problem solving by questions so that knowledge of what to do, when to do it and why to do it develops and leads to the question of how to perform movement in the context of play.

How are TGfU and the Game Sense approach Similar
Like the TGfU model, the Game Sense approach groups games of similar tactical construction / principles of play via game categories - Invasion (eg. football, netball), Net/Wall (eg. tennis, squash, volleyball), Striking/Fielding (eg. cricket/baseball) and Target Games (bowls/bocce). The CHANGE IT acronym developed for the Game Sense approach applied to the Playing for Life game cards, elaborates the pedagogy of 'Exaggeration'. Coaches and teachers Modify/Adapt (Change) the following game conditions (some might now call them constraints) so that the activity sets the challenge, the game poses questions (tactical problems), and the players are challenged to respond (answer)
C - Coaching style
H- How the game is scored
A - Area of the playing field
N- Number of players
G- Game rules
E- Equipment
I - Inclusion
T - time to perform actions

How are TGfU and the Game Sense approach Different
The skill acquisition perspective situating games as dynamic systems from which  play is emergent behaviour resulting from the interaction of the game constraints (person, task, environment constraints) has been linked to TGfU as a non-linear pedagogy. But, as the TGfU six-step cycle of learning (above) shows, TGfU remains a linear pedagogy – tactical to technical. A Game Sense approach, however, was explained by den Duyn in 1997 as pursued via the coupling of movement technique to game context, Technique + Game Context = Skill (Game Sense).  The game sense approach did not come with a stepped model. I have therefore argued that the Game Sense approach is then a non-linear games-based (not game only) pedagogy. This may be a nuanced distinction between the two, but  a distinction that seems necessary as it has been argued in the extant literature on game based or game centred approaches that TGfU is more evident in research than it is in practice as claims to use of TGfU in practice are often not observed to follow the 6-steps. To my thinking, the Game Sense approach is consistent with the information-movement coupling provided by representative games or game-form practice that is encouraged by a the manipulation of game conditions (or what some coaching scientists now call from an ecological perspective, constraints) to focus play on a strategic (team) or tactical (individual) learning.


In summary, game sense can be talked about as both the objective of teaching/coaching sport related games for understanding and as a game-based sport pedagogy. What has emerged over time, in coaching manuals, is the game form activities are often described as 'game sense games', limiting the idea of game sense to that of a type of practice activity with game representation: like a modified game, a small sided game, a match simulation, or a phase practice. Because of this, I like to describe the Game Sense approach as play with purpose to highlight the educative use of game play in a Game Sense coaching approach that is a game-based, but not game-only, practice session. 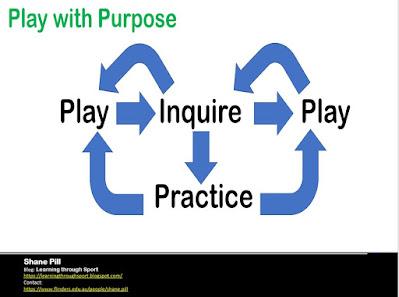 Concept Based Learning and Physical Education