Adapted from the paper What’s in a concept? A Leximancer text mining analysis of physical literacy across the international literature

The philosophy of physical literacy (PL) (Whitehead, 2001) has gained a sense of momentum in recent times, to the point where advocates have a philosophy and justificatory argument and are now in search of a supportive pedagogical argument (Kirk, 2013). This has the potential to be confusing as much of what is now being associated as the pedagogy of PL by some existed before PL became "a thing" (like fundamental movement skill development), or exists in teaching for effective learning and "quality teaching" literature.

I was teaching PE and Science in the 1990's when multi-literacy theory became the "in thing". Around the same time as the 'New London Group' were espousing multi-literacies theory and expanding the focus of literacy from reading and writing to an understanding of multiple discourses and forms of representation, Margaret Whitehead entered the contested territory of PE definition and direction, and the fields educational defence. Whitehead (2001, p. 131) presented a case for PL as part of the PE legitimisation debate by proposing a “description of a physically literate individual.” The case for PL is not the only or indeed first solution to an educationally defensible PE conceptualisation. Initially, Whitehead acknowledged similarities between PL and conceptualisations proposed by others, including Arnold (1979). Later,  Whitehead (2013) asserted that you ‘do not teach physical literacy’, and that PL is not a pedagogical model, rather, a rationale for the value of physical activity.

Hardman (2011) suggested PL departs from PE in that PE has been associated with the development of generic and specific competencies, while PL has been associated with motivation (see Whitehead, 2010). However, the definition demarcations between being physically literate and being physically educated are increasingly blurred as advocates of PL seek a supportive pedagogical construction (Corbin, 2016). Further confounding the PL proposition is the absence of empirical support for the theorising (Chen, 2015; Macdonald and Enright, 2013). The similarity between definitions of PE and being physically educated, and the replacement definition of PL that has occurred in some jurisdictions, has also added to the conceptual confusion. There has been suggestions that the term PL has been placed upon practitioners with limited evidence of a need to do so; to the point of being described as a “profession being distracted” from the more important things it needs to focus on (Lounsbery and McKenzie, 2015). There are many unsupported assumptions about PL and its educative role in the literature (Lundvall, 2015) being complicated by the substitution of PE for PL (Corbin, 2016).

For me, an interesting reflection is that while in Australia ideas about effective teaching have generally moved on from multi-literacies theory to teaching for effective learning, PE in Australia is being urged in some quarters towards PL. This potentially puts conversations in PE "out of step" with conversations occurring in other learning areas. While curriculum frameworks, such as the Australian Curriculum for HPE and the recently Board approved revised SACE Senior Years PE Curriculum frame valuing movement and the educative intent of PE through an Arnoldian perspective of education in, through and about movement, some assert the alternative to be PL. All the while, PL is defined as an attribute that is attained across the lifecourse and not achieved from PE. Personally, I feel PL has much to offer as a General Capability across the curriculum that encourages schools to be physically active and healthy environments because all teachers take ownership of constructing an active school day, and a school environment that encourages incidental and unstructured physical activity. 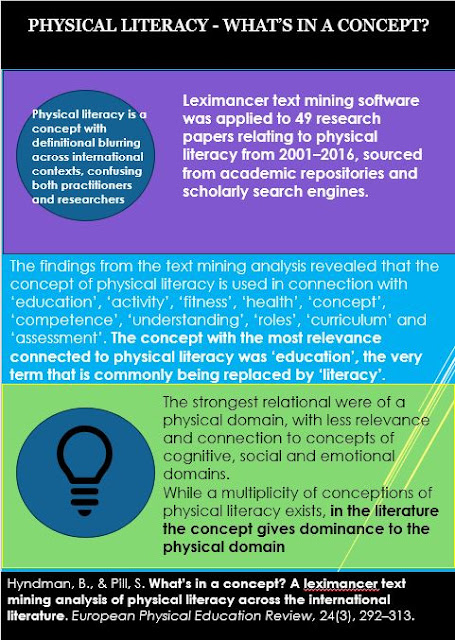