According to Martin (2010), soccer coaches historically:
tend to focus on players’ physical (skill and fitness) development without careful consideration of their holistic needs. The coaching session focus tends to involve a series of ‘drills’ and exercises [...] Consequently, players’ participation experiences can vary enormously in degrees of enjoyment and learning, and motivation for further involvement  (p. 1).

The “realistic context” of a game or a game-form “becomes the focus and starting point of practical sessions” (Australian Sports Commission, 1996, p. 1)

The Game Sense approach is described as flexible and ‘non-linear’ (Breed & Spittle, 2011; Pill, 2007; Light, 2013). This is shown in the following figure. After an initial game, a period of reflection occurs. This could be coach/teacher lead, or player-led discussion. Following this reflection, the ideas that emerged could be tested in a return to the game. Another option, is a pause in the game to isolate a micro-component of the game for drill practice before a return to the game to test if the practice has improved game behaviour. Individuals, groups of players, or the practice group might pause from the game for practice depending on the need identified during the reflection. A third option after reflection is the progression to development of game 1 with a modification to increase the challenge point of the game to players. In other words, progress the tactical complexity.

The purpose of teaching/coaching using the Game Sense approach is the achievement of tactical/strategical thinking as well as sport specific motor skill development (den Duyn, 1996). Examples of strategic thinking could include:
-       Where (and when) are the best spaces to run to receive the ball?
-       How will this impact on where your team-mates go?
-       How can you move to pressure the other team to try to re-gain possession after a turn-over? (den Duyn, 1997)

The practical focus is, therefore, on understanding the game through game-centred rather than technique first sport teaching/coaching (den Duyn, 1997). The Game Sense approach therefore positions the game centrally in the teaching/coaching session by coordinating the activities of the session through an element of game play (eg. maintaining possession of the ball) and by making a game the first engagement of the practice session. The judicious use of questioning is central to the instructional emphasis of the Game Sense approach (den Duyn, 1996, 1997; Thorpe, 1997).

Once players have consistency and control of fundamental sport skills the second stage of the Game Sense approach is game development and involves the use of modified ‘small-sided’ and ‘mid-sized’ games. According to Bhaskaran (2000), the small-sided approach involves building through (for example) 1v1, 2v1, 2v2 and 3v3 games. Small-sided games are particularly useful for developing the principles of play related to basic offensive and defensive tactical understanding (Launder, 2001; Pill, 2007; Wein, 2007). The mid-sized approach involves modifying a sport to the minimum number of players required to play a version of the game, with limited rules and specific rule modifications to emphasise a game understanding and/or a specific component of play (for examples, see: Bhaskaran, 2000; Launder, 2001; Pill, 2010; Schembri, 2005; Wein, 2007).

Soccer Games Sense Games
Grid Ball
Game Emphasis: Maintain Ball Possession
Objective: Defender tries to dispose attacker of the ball by kicking it away from the player in possession.
Instructions
Groups of 4 players in a 15mx15m grid.
3 players are given a ball and are nominated ‘attackers’
1 player (without the ball) is nominated the ‘defender’
Defender tries to kick as many balls as possible out of the square within a
playing time of (eg.) 60 seconds.
Attackers each try to move with the ball and try to position their body so the defender cannot kick the ball away from them
Soccer Game Sense
How do you ‘legally’ (within the rules) protect the ball from a defender?
What is a tackle?
How do you get into a side position to tackle correctly (within the rules), quickly (to force the tackle) and effectively (to make the tackle)?

Soccer small-sided Game Sense game
Mini –soccer: 3v3
Game Emphasis: Penetrate forward through the use of depth in attack.
Objective: Create a 2v1 to beat the defender and score or reposition defender so there is a clear shot on goal
Instructions
Divide a playing grid into three zones with a goal at either end
The game starts and restarts with each team having two midfield players starting in the centre third/middle zone and one player in the back third/back zone.
At all times during play there must be one ‘defensive’ player from each team in that teams back third/back zone.
Soccer Game Sense
Why should one of the 3 attacking players ‘hang back’ behind the team-mate ‘on-the-ball’?
What tactical advantage is created when an attacking player positions behind the team-mate ‘on-the-ball’?
What do ‘off-the-ball’ attacking players do to support the player ‘on-the-ball’?

Where players are ready for more refined game development, the use of ‘designer games’ to “chunk” (Charlesworth, 1994, p. 30) tactical, technical, psychological, competitive and physical skills into an economical package simulating match conditions while honing skills and specific fitness requirements (Charlesworth, 1994) can be implemented. A designer game is then game play deliberately planned to extend game sense skill development through a competitive environment simulating match conditions. The ‘match’ is constructed (or constrained) to achieve a specific game understanding (Charlesworth, 1993). For example: 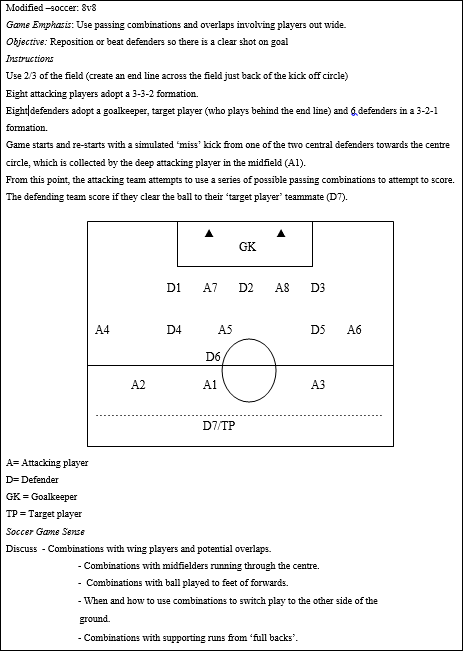 In conclusion, an assumption of the Game Sense approach can be summarised by this quote from Rick Charlesworth: Any number of training drills can emphasise skills and/or provide physically taxing tasks. However, few offer the continuity of the designer game and none provide the competitive, strategic, distracted and “decision-laden” environment in which to do it (Charlesworth, 1994, p. 33) 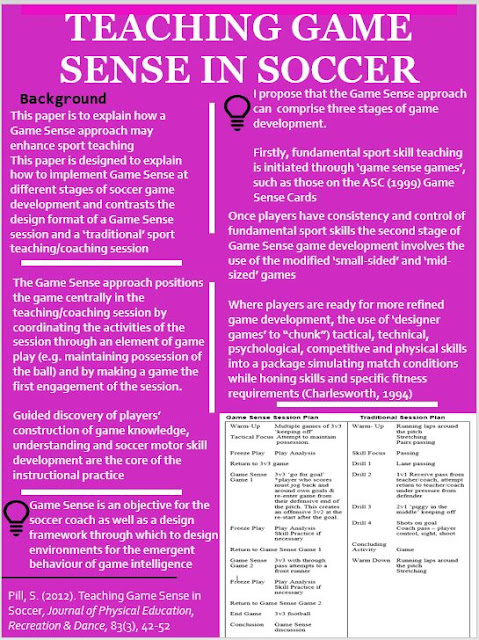