In a tennis match, players must match their movement models to the diverse and often changing game conditions. The changing conditions include variations in speed, spin and bounce of the ball as it is intercepted by the racquet, and different placement areas of the ball on the court. These dynamics are often at odds with the common practice scenarios presented to players, where sport teachers minimise variation in height, spin, speed and placement of the ball in drills requiring the ball to be hit repeatedly to the same court space from the same court position (Reid, Elliott & Crespo, 2013). Tennis is a complex game to play and this common emphasis on task decomposition and regression to learning as rote repetition via the practice of feeding balls to players to hit has little transfer to the complexity of the game (Hopper, 2007) as it does not represent the game to the learner.

Sports like tennis have, however, commonly been coached with a technical-before-tactical ‘sport as techniques’ paradigm where skill has been equated with technique. In contrast, the Game Sense (GS) approach emphasises the game as a dynamic and complex system where skill is the demonstration of technique meeting the solution to the configuration of play in the moment (Pill, 2013). GS coaching thus begins from the perspective that “technique + game context = skill” (den Duyn, 1997, p.3) and so the practice of the sport teacher “is game-centred rather than technique centred” (den Duyn, 1997, p.2).

The traditional coaching approach where learning a stroke typically occurs without a tactical intention, is seen to be deficient as in match play every stroke requires decision-making and is performed with a tactical intent (Elderton, 2009). Players must learn the cognitive skills of problem solving and decision making to guide two basic tactical conditions of the game - shot selection and court position, in order to be successful on the court (Mitchell, Oslin & Griffin, 2013). Consequently, there is increasing appreciation of the value of guided exploration at all levels of game development to develop ‘thinking players’. The development of thinking players is a particular emphasis of the GS approach where “the game becomes the focus of the practice session (rather than the technique) and challenges players to think about what they are actually doing and why” (den Duyn, 1997, p.2).
Three pedagogical tools are integral to the GS approach’s focus on game-based learning:
1. Adapting game structures (such as game rules and play space) to promote, exaggerate, control or eliminate game behaviours;
2. Focused use of representative modified game forms suited to the age and/or stage of game development, understanding and physical readiness of the players while retaining the essential tactical structure of the game; and,
3. The sport teacher guides player skill learning by guided discovery with questioning.

The tennis tactical-technical connection can initially be probed through two basic tactical conditions of tennis- shot selection and court position, and then further understood in relation to three principles of play:
1.    Consistently returning the ball;
2.    Placement of the return into the opponents’ area of play to make it difficult to return; and
3.    Control of the ball flight.


Each of these principles of play offers a conceptual focus for game development during practice (Mitchell et al., 2013; Hopper, 2007) as each of the principles of play is related to the five game situations: serving, receiving serve, back court-to-back court play, at the net, approaching the net (Tennant, 2004). The five game situations are interpreted by the player in situ of the game through on-the-ball shot selection and court position problems, and off-the-ball reading of the game to decide how to position to respond to the next on-the-ball moment. The tennis tactical-technical connection is modelled in Figure 1. 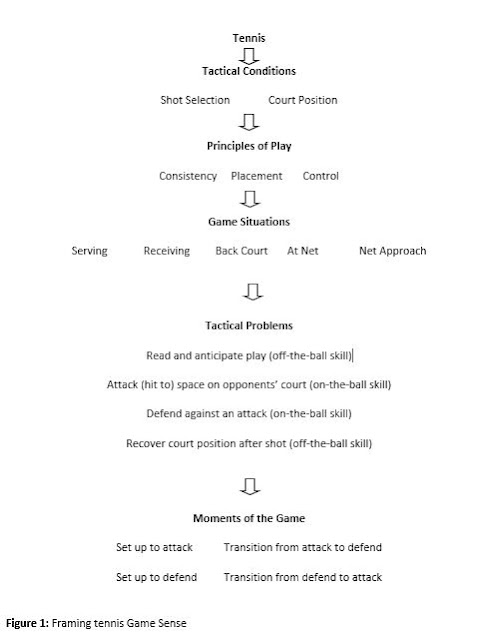 The ability of tennis players to successfully read the game and then realise tactically what to do and technically how to do it, is integral to playing tennis. Therefore, an approach that facilitates the complementarity of player decision-making and the technical mechanics of movement ‘makes sense’. Traditionally, however, sport teachers have preferred directive and prescriptive coaching where tactical information is presented only after techniques have been perfected. The GS approach provides tennis coaches/teachers with a pedagogical approach that challenges skill learning as interdependent technical and tactical development (Reid et al., 2007). 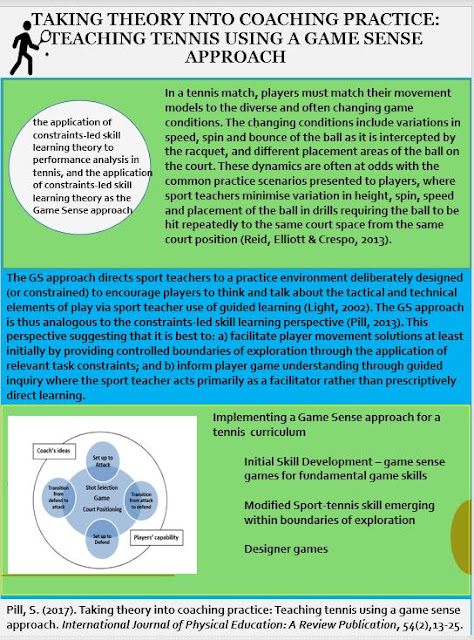