One of the interesting observations of this study was that in both games ground ball pick-ups was one of the main possession characteristics. This has implications for skill development at junior levels. The full field 18-a-side game had more ground ball pick-ups. We hypothesise that this is because there is greater distance between players in the 18-a-side version compared to the 12-a-side version, and often the players were not yet physically developed to be able to kick the ball the required distance that would create a marking opportunity for their team-mate. This seems logical as a 13 year old body is on average smaller and less developed than an adult body, and so the average kick of  13 year old will not travel as far as an adult. On its own, this observation creates a strong argument for scaling the size of the field for youth u14 football and junior football. Combined with the observation that the scaled version creates a context for greater game engagement, it simply 'makes sense' to be playing modified versions of the adult game suitable to the 'readiness' of the players and not forcing them into full field 'adult rules' games at this age group.

For more information about this study see this open access paper https://content.sciendo.com/view/journals/ssr/24/3-4/article-p171.xml 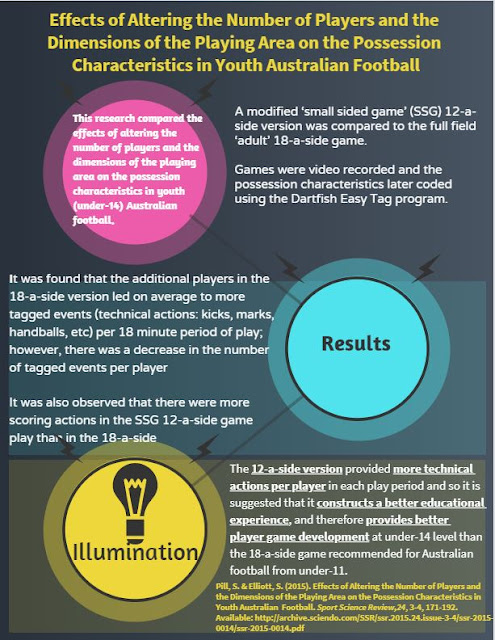