Those familiar with my work will be aware that I work with the Game Sense approach for games and sport teaching as it has been, since the mid-1990s, the pedagogical expression for Australian sport. Since the mid-2000s it sits as the platform of the Playing for Life Philosophy of Australian sport, and more recently, the pedagogical model through which the Sport Australia Sporting Schools Program should be delivered. I work in Australia, and so I have adopted 'the Australian approach' in my teaching and coaching research.
I have explained how the Game Sense approach works for sport coaching from a dynamic systems perspective and affordance theory, and how the pedagogy of purposeful play through game modification to condition games for specific teaching effects sits comfortably with the pedagogical expression of a constraints-led approach. However, as a teacher and researcher in the pedagogical tradition theories are understood as only ever 'partially right' as they are always "partially wrong'. Theories are a tool to help explain "why this' and 'not this', but there can be more than one theory to explain that decision making, and so it is important for my work to read across theories.

Deliberate practice theory is one of the theories that I like to pay attention to. In this area, a recent paper by Hendry & Hodges (2019) I found particularly interesting.

In this paper, it is said that in the field of movement expertise there is a large amount of research seeming to support the necessity to engage in large volumes of domain (movement form) specific activity during youth as a pathway to expert performance. It is suggested that there is some evidence that beginning this domain (movement form) specific activity in childhood (see Ford, Ward, Hodges & Williams (2009) "early engagement hypothesis" for an explanation) may also be advantageous as part of the pathway to expert performance, however, there also exists strong advocacy in the literature against early sport specialisation.

According to Hendry & Hodges, there is the strong possibility that play (game practice) may be beneficial to the pathway to movement competence and then expertise as it adds volume of practice in the sport rather than some specific perceptual-decision making- action environment that benefits the development of expertise. However, although volume is important, Hendry & Hodges argue that play is not sufficient of itself for high level skill development despite the strong arguments for play-based activities by some supporting a constraints-led approach. In tune with this argument, MacNamara, Collines and Giblin (2018) have made a cogent argument that play-based approaches that suggest movement competence develops as a natural consequence of experience and self-discovery are unsupported and sometimes appear to ignore the substantial body of research highlighting the role of structured instruction and feedback in learning movement skills. They advocate for a deliberate preparation approach in the early years of movement skill development.

What to take away from the ideas coming from the Hendry & Hodges (2019) paper? They suggested the data from football-soccer research suggests that engagement in domain specific activities from an early age, both as deliberate practice and play, and early specialisation in a domain (e.g. soccer) accompanied by diversification by participating in a number of sports from an early age, is the pathway to developing performance expertise in interactive team sports. However, the point they make about a "person-orientated approach" made me think about the wisdom of Muska Mosston, who in his ground-breaking book of 1966, provided a non-verses explanation of teaching styles which emphasise 'teacher' pedagogical decision making as decisive in matching the learning environment to the desired learning effect for the learning need of the 'student'. Brendan SueSee, Ken Edwards and I showed in this paper how a game-based teaching episode, from a pedagogical lens, can be seen to be not a style of teaching/coaching, but a cluster of teaching styles where one style might be said to have emphasis to give the episode a distinctive tone perhaps, but more than one style is employed. 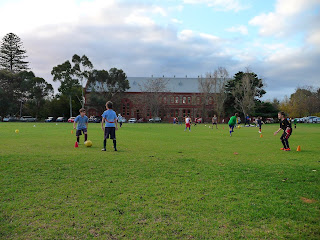