Sport coaching and PE Teaching - thinking like a game developer

A day does not seem to pass where I see someone blog or tweet about the the present generation of youth and young adults wanting instant gratification and on demand attention, sometimes inferred and other times directly stated as a result of 'video game' and 'digital gaming' culture, as reasons for declining participation in physical activity and sport. 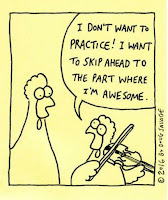 In a 2016 blog What does it mean for pedagogy to think like a game developer? associated with a keynote at the Asia Pacific PE Conference I explored what sport teachers might take from digital game designers to power-up participation in sport. That presentation and blog were based on an article I published in 2010 Smart Play: Sport Is Not Just About Skills and Drills which I expanded upon in JOPERD in 2014 (see here for the paper). A premise of that conceptual paper was that sport coaches and teachers of sport in PE faced a similar pedagogical challenge to digital game designers - how do you get a person to commit to something that is complex and complicated, involves continual failure, and thus takes a long time to learn - and get them to still enjoy it?

I recently had the opportunity to update some thoughts on this participatory challenge and what it means to think like a game developer, as this was the topic I was asked to speak on at the 2019 ACHPER(SA) Secondary HPE Conference. People familiar with my work will know that the idea of game design has been something I have been interested in since the early 1990's when I came into contact with the ideas of Rick Charlesworth on sport coaching and Designer Games; and this led me to an interest in the game sense coaching approach and the concept of 'game sense games'. 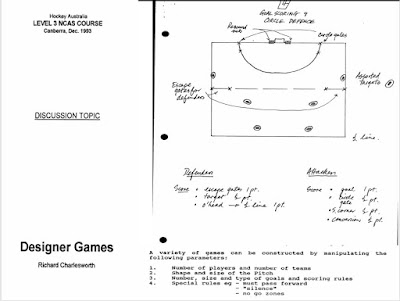 I have since learnt that the broad pedagogical idea of designing games by purposeful conditioning of a game to couple tactical and technical game development was evident in the approaches of Allen Wade and Eric Worthington to coaching football/soccer in the late 1960's and early 1970's (for a summary of Allen's and Eric's coaching concepts see this blog from March 2018. 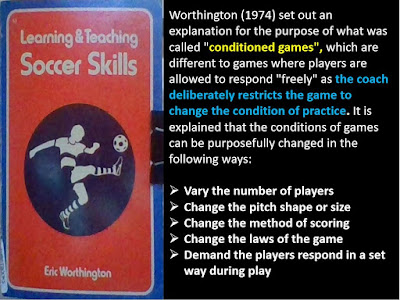 Going back to the paper I wrote in 2014, my initial thinking on digital game design and sport teaching in PE/sport coaching centred on Gee's Digital Game Design Features. In this 2017 concept paper I worked with Amy Price and Terry Magias to take the ideas from the 2014 paper on sport teaching in PE informed by digital game design principles to sport coaching. In this paper, the concept of a sport as a game world was explored. A game world is the physical, temporal, environmental, emotional, and ethical dimensions of a game, as well as a quality called realism.

Amy Price has extended that 2017 thinking in a creative way to coaching football/soccer, which we explored in this paper. The challenge grid concept was an interesting addition to the ideas we had previously discussed from Digital Game Design Features, applied to the key tenet of a game-based coaching approach: condition games purposefully. 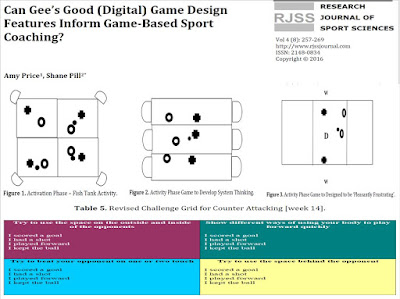 Amy has continued to explore what digital game design/video game design principles might 'look like' when applied in a sport coaching setting, while my research has taken me away from this area for the moment into interesting application of a game-sense approach to teach indigenous games in PE, and exploration of coach development programs. Amy's recent exploration on meta-cognition is particularly useful for those interested in the development of self regulated learners. 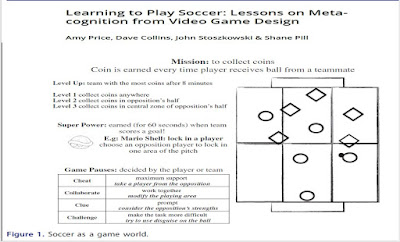 Something I have noticed, however, is how similar the pattern of learning engagement in learning in video game/digital game play is to the Play with Purpose explanation I use for a game sense approach. 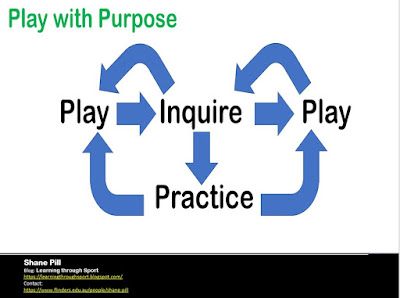 I use this diagram a lot in my teaching and workshops on the idea of the game sense approach as play with purpose. In 2007, I was approached to publish ideas I had been collating for over ten years at that point in time, on game-based teaching of sport and sport lead-up games as the Game Sense approach. What I had been observing for some time, was that a lot of teachers and sport coaches used games in practice and lessons, but not in an educatively purposeful way. Games and modified sport have been incorporated into lessons and practice sessions of PE teachers and sport coaches  'forever', and in a study I published in 2011, the contributing teachers suggested that small sided and modified games, and asking questions to create inquiry into and about the play engagement, were of themselves not unique to 'teaching games for understanding', such as with a Game Sense approach (see here for that paper).

In 2007, I chose the title 'play with purpose' to emphasise the use of games purposefully - deliberately, as my observation of over 18 years of teaching and then a couple of years of teaching supervision rounds at that time was that questioning was generally used 'ad hoc', and game play was used as a 'book stop' to lessons or training. In the resource for middle years PE, I wanted to show how to progress from small sided games to teach principles of play (the educative purpose) within a thematic curriculum structure provided by game categories to:
- at Year 5/6 develop concepts associated with the principles of play in small sided games
- at Year 7/8 locate the concepts associated with the principles of play in modified/adapted/conditioned/constrained (use the term that fits your epistemological stance) sport game forms
- at Year 9/10 to locate that learning of education in movement alongside education through sport and about sport for student agency in life beyond 'the gym wall' (which I called, sport literacy: hence the second edition of the resource in 2010 was subtitled 'game sense to sport literacy: edition 3 (revised: 2015) of Play with Purpose: Game Sense to Sport Literacy is available here)
At that point in time (2007) of writing the first edition of Play with Purpose, illustrations of the Game Sense approach tended to show the use of small sided games to teach 'sport skills' in game categories, which did not provide the 'curriculum journey' indicated in most curriculum standards or outcomes based frameworks, which progressed from 'general movement ability' to specialised applications of that movement ability. This progression is what I wanted to show in the two Play with Purpose resources, without needing to teach specific sports for talented performance of the sports, instead emphasising concept development with game categories (a thematic curriculum model).

In 2012, the South Australian Catholic Primary School Sport Association approach me with a grant to write and publish an FMS Play with Purpose resource, to provide a concept based approach to FMS teaching in Grades Foundation/Reception/Kindergarten to Year 4 using game categories (Play with Purpose: For Fundamental Movement Skill Teaching (2013) is available here). While the two resources provide a 'concept based' approach to teaching the PE focus area of games and sport using a thematic curriculum model (game categories) from F-10, I only briefly touch upon deliberate game design and a 'play cycle' (shown in the earlier illustration in this blog) in Play with Purpose: Game Sense to Sport Literacy with a scaffold of primary (fixed) and secondary (negotiable) rules. At the time of writing those resources, I had only just started to 'get into' deliberate game design in more detail, initially through the work of Katie Salen and Eric Zimmerman (2003) in Rules of Play: Game Design Fundamentals which I discovered while doing my PhD. If I had the opportunity to update the Play with Purpose resources, there would be a section on game design for teachers who are ready to go from purposeful educative use of small sided games and game forms/modified games to the design of games to deliberately teach the 'logic of play' and to develop players as 'decision-makers' as they progress through a 'sport' as a 'game world' (which digital games are designed to do).

If any of these ideas interest you, please let me know and we can chat, or maybe we can get a research project underway.