A few years back, I was asked by a state Australian football (AFL) sporting organisation to help them with a competition engineering project. The president of a junior football association had been to a few coach education sessions and become convinced of the merits of small sided game forms for juniors. He asked me and a few people in coach development from the state league to come along and talk to the association club delegates to convince them to change to 9-a-side football rather than the 18-a-side games being played at U8 and U9 grades.

Now, there is a lot of research on the merits of small sided game forms. That research consistently shows most junior players prefer it as they touch the ball more often and kick more goals - in other words, there is more engagement (ball touches) and fun (kicking goals). Most of that research is in football (soccer). At the time of our discussion with club delegates, there wasn't any Australian football (AFL) research we could lay our hands on, so I presented the football/soccer research. 'Wouldn't you know it', straight away the 'opposition camp' went to 9-a-side is not the 'real game', fuelled by the logic of 'where is the Australian football research to tell us it would be a good thing?' (even though, the AFL Match Day policy was recommending 9-a-side at this age group!).

After a few meetings, thanks largely to the fact that a lot of the club coaches attending the second meeting with their club delegates were PE teachers and 'got it', the vote to trial 9-a-side got up. A few months into the season, I was at a local club doing a coach development session on the Game Sense approach, and the club's junior league president/delegate who had been a vocal opponent of the idea of 9-a-side during meetings, sidled up in a quite moment and told me 'he had it wrong', the 9-a-side competition was a great success based on feedback from parents and players. Typical of other comments I received from parents I knew were: 'You have anything to do with that 9-a-side trail this year? It's typical of the sort of thing you would push. It's been great. My child is touching the ball so often I can't wonder off and get a coffee anymore!'

The upshot of this engagement, were a couple of projects to build an evidence base for small sided not just modified game forms and competition engineering in junior Australian football, for participation, game development, and attrition (to keep players in the game for longer).

The first project we did, looked at game form at U14 level. The hypothesis was, it is not ideal to go from 9-a-side at U8 and U9 to 18-a-side at U10 and above. Again, football/soccer has done a lot of research in this area that we could draw on. The project and the results are summarised in this infographic. 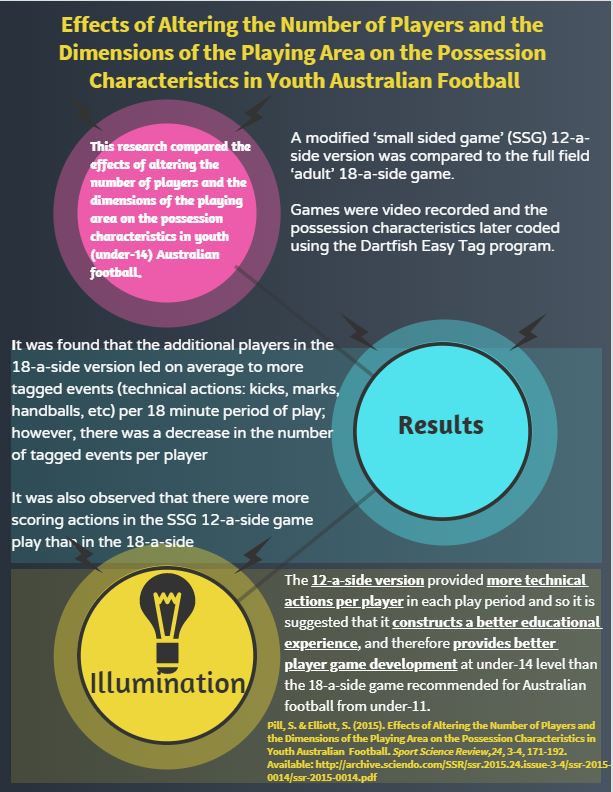 What surprised me in this project, was how often the players had to pick the ball off the ground (tagged as a ground ball pick-up) in full field play. However, when you think about it, the players often were not yet developed enough to kick the distance between team-mates and so the ball would drop short of the target player and be on the ground. It was probably 3.5 adult kicks straight down the ground goal-to goal, but 5-6 U14 kicks. Perceptually and spatially, the U14's were playing a different game to 'adults' if they were not playing on a modified field.

The final project in this series, looked at the different pattern of game engagement in 12, 15 and 18 a side game forms with U10's. Again it was clear that in the small sided game form players touched the ball more often and therefore were getting a higher amount of tactical and technical game engagement, and it could be hypothesised that their game development was therefore being accelerated more than if they played 18-a-side (because 9-a-side provides more tactical and technical game 'practice' per player). 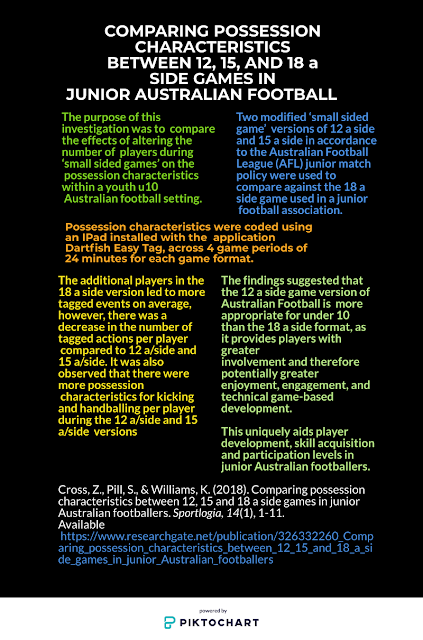 If any of this interests you, please let me know. If it sparks an inquiry question and you would like to look at undertaking some research, it would be great to hear from you. Contact me at -
https://www.flinders.edu.au/people/shane.pill