The past two weeks I have been guest of the University of Coimbra and Fontys University of Applied Science Sporthogeschool. I had the opportunity to offer workshops for students and practitioners on the Game Sense coaching/teaching approach and athlete-centred coaching An athlete-centred coaching approach promotes athlete learning through player ownership of their learning and responsibility for their learning, guided by the coach/teacher.  These ideas are explored in the recent book Perspectives on Athlete-Centred Coaching 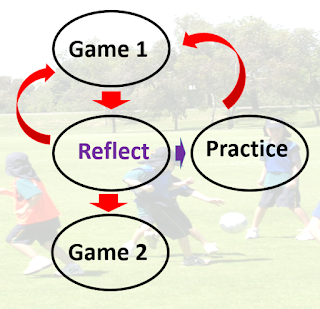 Diagram 1. The complex flow of learning in a Game Sense coaching session which makes the game or a game form the focus of the practice session 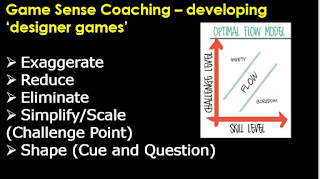 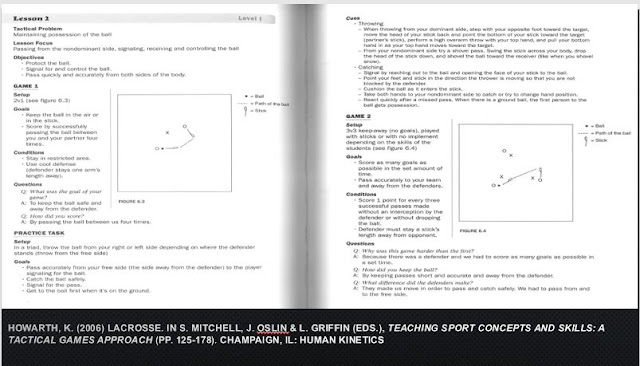 Diagram 3. What a game-centred approach, such as the Game Sense approach, might look like in secondary PE.

If you are interested in knowing more about the Game Sense coaching approach, I have summarised some ideas on coaching invasion games like football here and a few more examples here If racquet sports are more you interest, I share a few ideas for tennis here, while for net/court sports a few ideas for volleyball are shared here I will be offering a Game Sense symposium at the ACHPER International Conference, January 14-16: if you are interested in the idea of Game Sense teaching/coaching, I hope to see you at the conference (register here)

Humanistic perspective on coaching
The athlete-centred coach positions the athlete/player as responsible for their learning. Not just their game learning, also their learning to be good people - at the club and in community. An important chapter in the book Perspectives on Athlete Centred Coaching (link)  is provided by Deb Agnew and Andrew Marks, who discuss the role of coaches in assisting athletes for life beyond the sport, when that transition needs to occur for the person. Transition in sport is inevitable, however, too often, athletes transition involves a sense of loss, even grief, and sometimes a lack of control over the situation and events that follow. At the elite level, players comment that they were use to the clubs 'doing everything' for them. Athlete-centred coaching brings a coaching perspective on developing better people for their life now and in the future, not just developing better players. This is well explained in the book, Legacy, and the culture of the most successful sport franchise in the world, summarised as 'better people make better All Blacks - and better fathers, partners and friends,  and later better businessmen, carpenters,  or lawyers.

In summary, athlete-centred coaching is a style of coaching promoting athlete learning through appropriate to age and context responsibility, ownership, initiative and awareness - guided by the coach. It is underpinned by a philosophy of empowering players as learners. There is an emphasis on relational understandings that extend a coach concern to the whole person. Many physical education teachers will read this and consider, that is simply what good teachers do - and they would be right.